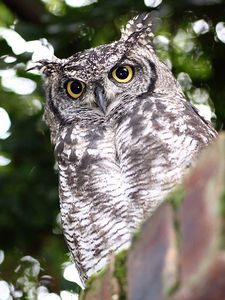 All owls are carnivores. They catch small animals with their feet, kill them with a bite to the neck, and swallow them head-first. Most owls hunt from a raised perch. They sit, watch, and listen, then swoop or glide to their prey. At the last minute, they swing their legs forward and spread their talons to strike. Very large owls (such as eagle-owls) take medium-sized mammals such as rabbits, skunks, and monkeys. Medium-sized owls take mostly small mammals, such as voles, rats, mice, and shrews. Small owls feed mostly on insects along with other invertebrates such as snails, spiders, scorpions, moths, or crickets. Many owls occasionally take bats, birds, small reptiles, and amphibians in addition to their preferred prey. Many species cache (KASH), or store, extra prey to eat later. In cold climates cached prey may freeze. The owl just sits on it to thaw it. Owls swallow their prey whole but cannot digest hard bones, fur, and feathers. These materials are later coughed up in a neat package called an owl pellet.