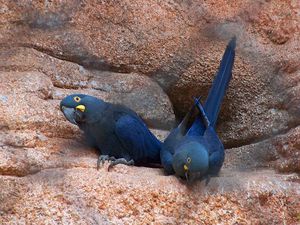 Most parrots live in the Southern Hemisphere, the portion of Earth south of the equator. This range includes the continents of South America, Australia, and Africa. Parrots also live in Central American countries including Belize, as well as countries including Mexico, New Zealand, New Guinea, India, and Afghanistan.

Parrots are tree-dwellers that live in various habitats. They live in rainforests where heavy rainfall throughout the year produces an abundance of trees and plants. In deciduous forests, parrots live in trees that shed leaves. Parrots also nest in coniferous forests where evergreen trees don't shed leaves. Some birds also live in grasslands, where there are few trees.

About one-third of parrot species face danger of extinction, with species dying out as habitat is lost because of human development. Extinct species include the Carolina parakeet, the only parrot that lived naturally in the United States.