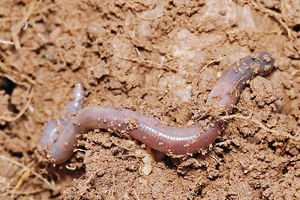 Earthworms are found worldwide. They do not occur in deserts, polar regions, or in strongly acid soils. A few species have been widely distributed by humans.

Earthworms eat dead and decomposing leaves, decaying roots, and other bits of plant material, or detritus (dih-TRY-tuhs), in the soil. Worms living in leaf litter layer, upper soil, or in soils in tree canopies eat freshly dead plant materials. Other species, such as the European night crawler, always live in deep burrows. They come up to the surface to also eat freshly dead plant tissues. Still other species remain deep in the soil, where they eat long-buried bits of detritus.

Earthworms are very important because they improve and maintain soils, helping plants to grow. Their burrowing activities not only allow air into the soil, but also provide food for growing plants by mixing soil with bits of plant materials. Several species of earthworms are raised to collect their waste for use as a high-quality compost for gardening. Others species are raised and sold as fish bait.