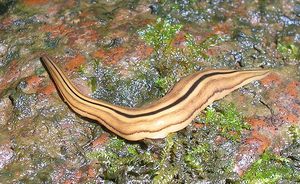 Physical characteristics: The body of the freshwater planarian is lance shaped with ear-shaped structures on each side of the head. These worms are light to dark brown, and some forms have a stripe down the center of the back. This worm has midline, light spots on a dark background or dark spots on a light background. The large mouth is in the middle of the body.


Geographic range: Freshwater planarians live all over North America and are scattered in Europe, where they may have been introduced with water plants.

When hunting, freshwater planarians swing their heads from side to side better to sense sources of chemicals coming from food or prey.


Conservation status: Freshwater planarians are not threatened or endangered. ∎