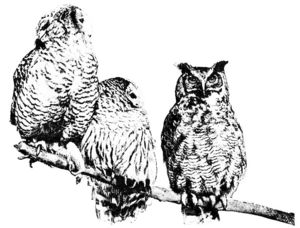 Representatives of the family can be found on every continent except Antarctica. In contrast to tytonids, which are found only in regions where the climate is mild, some typical owls live in very cold climates.

Typical owls can be found in almost every type of habitat, but 95 percent are forest dwellers. The term "forest" covers a wide range of habitats, from tropical rainforest to boreal evergreen forest.

Small mammals such as voles are the most important food item for many typical owls. The type of prey taken varies with size. Small owls eat mostly insects but may also take small birds, reptiles, and amphibians. The largest owls, the eagle-owls, may take such large animals as rabbits, hares, and pheasants. The group called fishing owls eats fish almost exclusively.