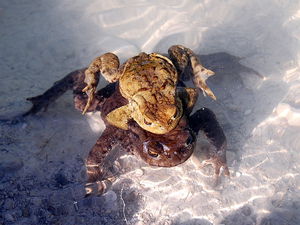 Like other amphibians, frogs can breathe through their skin, but they can only do so if the skin is moist. Most frogs are active at night, which is when the air is more humid. Humid air helps them keep their skin moist. During the daytime, these frogs sit still in moist places, like under a rotting log, in a muddy place, underground, or in the crack of a rock. Even when frogs are active at night, they spend a good part of the time sitting still. This is how many species hunt. They remain in one place and wait for an insect or other prey animal to wander past, either grasp it with their mouths or flick out their tongues to snatch it, and swallow it whole. Most frogs have sticky tongues that attach in the front of the mouth and flip outward. Some frogs, including the poison frogs, take a more energetic approach to hunting, and hop about looking for their next meals.

Frogs often mate based on the weather. Those that live in warm, humid places may mate any time of year but usually only do so during or after a rainstorm. Frogs that make their homes in colder climates commonly wait until the temperatures warm and the spring rains have come. For species in especially dry areas, the rainy season is the time for mating. The males of almost all frog species call during the mating season. They make the calls by sucking in and letting out air from the vocal sac, which is a piece of balloon-like skin in the throat area. Most frogs, like the spring peeper, have one vocal sac, but some species, including the wood frog, have two. The males of each species have their own calls. The calls not only attract females but sometimes tell other males to stay away and find their own mating places. In a few species, calls may not be enough, and two males may fight. Most fights are little more than wrestling matches, but in some species, like the gladiator frogs, males have sharp spines and often injure one another. In many frog species, the males call together in a group. This type of group calling is called a chorus (KOR-us). In some species, the males all call and mate over a very short time, often within a few days. Frogs that breed over such a short time are called explosive breeders.

To mate in most species, the male scrambles onto the back of a female in a piggyback position called amplexus (am-PLEK-sus) and hangs onto her. As she lays her eggs, he releases a fluid. The fluid contains microscopic cells called sperm that mix with the eggs. This mixing is called fertilization (FUR-tih-lih-ZAY-shun). Once fertilization happens, the eggs begin to develop. The tailed frogs do things a bit differently. The males have "tails," which are actually little bits of flesh they use to add their fluid to the eggs while the eggs are still inside the female's body.

In the 1990s, scientists noticed that the number of frogs around the world was dropping. Some species were nearly gone, and others were already extinct. They began trying to figure out why and now believe that many things may be to blame, including air and water pollution, habitat destruction, and infection with a fungus, called chytrid (KIT-rid) fungus. They also believe that introduced species are a danger to frogs. People often add fish to streams or ponds without thinking about what will happen to the frogs that use the water, too. In many cases, fish eat frog eggs, tadpoles, and sometimes adult frogs. Just a few fish in a pond may be enough to gobble up every frog egg and tadpole for the whole season. Since most adults only live and breed for a few years, the fishes can quickly wipe out an entire frog population.

Depending on the species, a frog may lay less than a dozen eggs at a time or more than a thousand. The typical female frog lays her eggs in the water, often in underwater plants, and she and the male leave the eggs alone to develop on their own. In a few species, one of the parents stays behind to watch over the eggs and sometimes stays to cares for the tadpoles, too. The typical frog egg develops in the water into a tadpole. In some species, the egg develops instead in a moist spot, and in a few species that moist spot is inside a pouch or on the back of one of the parents. A number of the frogs that have their young on land lay eggs that skip the tadpole stage and hatch right into baby frogs. In most frogs, however, the eggs hatch into tadpoles that continue growing in the water. Most tadpoles begin to change into froglets within a month or two, but some remain tadpoles for a year or more. The change from a tadpole to a froglet is called metamorphosis (meh-tuh-MOR-foh-sis). In this amazing process, the tadpole's tail becomes shorter and shorter, tiny legs sprout, and the tadpole begins to take on the shape and color of the adults. Soon a tiny froglet, often still with a little bit of the tail left, takes its first hops.