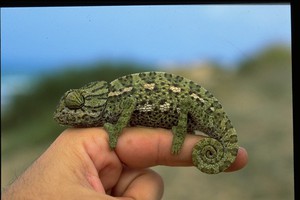 Chameleons are found mainly in Madagascar and Africa, and a few species live in southern Europe, Asia, the Seychelles and the Comoros. No chameleons are native to the Americas, which means that all of them were brought into the Americas. One species is now found there in the wild.

Chameleons live in a variety of habitats, such as dry deserts; tropical, rainy woodlands of evergreens; forests with trees that lose their leaves in winter; thorn forests; grasslands; scrublands, or land with low bushes and trees; and cloud forests, or wet, tropical, mountain forests. They can be found from sea level up to mountainous areas as high as 15,000 feet (4,572 meters).

Chameleons eat a variety of flying and crawling insects, including butterflies; insect larvae (LAR-vee), or young; and snails. The larger chameleons eat birds, smaller chameleons, lizards, and sometimes snakes. Chameleons also eat plant matter, including leaves, flowers, and fruits. Some chameleons stay within small areas for their food supply, but others travel long distances seeking food. All chameleons need drinking water, which they get from dew or rain.

Chameleons do not normally interact with people. Wild chameleons are sometimes caught and sold to tourists. Chameleons are also taken from their habitats in the illegal pet trade, and many die from stress or improper care. Habitat destruction, forest fires, and air and water pollution, or poison, waste, or other material that makes the environment dirty and harmful to health, are major problems.