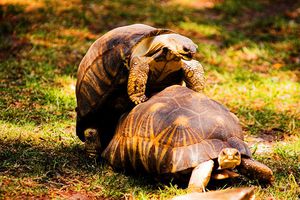 One of the most commonly known behaviors of turtles and tortoises is their ability to pull their legs, tail, neck, and head inside the shell. Many of them hide from attackers this way, but not all of them are able to do it. Side-necked turtles, for example, can pull in the tail and legs but can only tuck their necks along the bridge. Other species, like the big-headed turtle, are hidden-necked but their heads are too large to fit inside the shell. Other turtles have hinges in the lower shell that allow them to draw the lower and upper shells tight against one another once the head, neck, legs, and tail are inside. A few species even have hinges on the upper shell. Attacking animals, or predators (PREH-duh-ters), find it very difficult to get at the turtle's soft body inside such a tightly closed shell, and the turtle usually survives without harm. Besides protecting the turtle from attackers, the shells protect the turtle from drying out too much on hot, dry days. Hinges in the back of the plastron also allow the shell to open wide enough for some female turtles to lay large eggs.

Many water-living turtles are excellent swimmers. Some, such as leatherback turtles, have paddle-like front legs that help them swim hundreds of miles in a year. Others, such as softshell turtles, have webbing between their toes that helps them sweep through the water. Some species of water-living turtles, however, are poor swimmers. American mud and musk turtles, for example, are small to medium-sized turtles that move slowly through the water by walking across the bottom rather than swimming. Land-living turtles and tortoises can get around quite well on the ground, although their shells do not allow enough leg movement for fast running.

Turtles and tortoises are able to protect themselves from predators by hiding inside their shells and in other ways. Many turtles have musk glands, which are small sacs that ooze a substance with a strong odor. This odor may be enough to make a predator stop its attack and leave the area. Some turtles fight back with strong bites. Snapping turtles, for example, are vicious and quickly fling out their long necks to bite at anything or anyone coming too close. Besides having a hard bite, snapping turtles have sharp claws that can badly scratch anyone who picks up the turtle from behind. Other species that are quick to bite include softshell and musk turtles.

During mating season, or courtship, the males of many species of turtles and tortoises try to attract females by methods that can range from head bobbing and gentle rubbing against the female to biting her legs or ramming his shell into hers. Some species, on the other hand, have no such courtship behaviors. Species that live in warmer areas may mate and nest at various times of the year, but those that live in cooler areas usually mate in the fall or spring and nest in the spring or summer. In many species, the female can mate once and lay eggs from that mating for several years.

Most female turtles and tortoises nest by finding a spot on dry land, digging a hole, dropping the eggs inside, and burying them. A few species skip making a hole and simply lay their eggs among leaves on the surface of the ground. Most turtles and tortoises provide no further care for their eggs or young. The Asian giant tortoise is an exception. The female of this species lays her eggs and stays with the nest for a few days to keep away predators. Most of the smaller species of turtles and tortoises lay one to four eggs at a time, but larger species can lay fifty or more. For most turtles and tortoises, the temperature of the nest controls whether the eggs hatch into males or females. A very warm nest usually produces females, and a cooler nest produces males. In some species, an extremely cold nest temperature produces females too. In a few species, the nests have about equal numbers of males and females, no matter what the temperature of the nest. Newly hatched turtles and tortoises, or hatchlings, have a small, hard, tooth-like part on the upper jaw called a caruncle (KAR-un-kul), which helps them break out of the egg. Hatchlings usually head straight for the water or for a hiding spot on land, but a few species that hatch during cold winter months stay underground until spring. Adults of many species that live in colder climates enter a state of deep sleep, or hibernation (high-bur-NAY-shun), during the winter months. Many species that live in hotter areas survive dry weather by entering a state of deep sleep known as estivation (est-ih-VAY-shun).

HOW TURTLES AND TORTOISES USE THEIR SHELLS

A turtle's shell can be important in several ways. It can help the turtle protect itself from attacking animals. The shells of some turtles are so thick and strong that they can even resist the bite of a large crocodile. Other turtles, such as Asian river turtles, often dive very deeply, where the water pressure would be severe enough to crush their lungs if they were not protected by the shell. In turtles that live in very dry places, the shell provides a shield from the sun and helps the turtle keep from drying out too much. Tortoises, which live only on land, use their shells for yet another purpose. They collect rain in the crevices of their upper shells and then tip their bodies forward so the water runs down the sides and into their mouths.