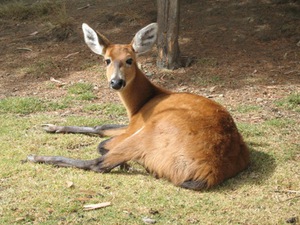 Deer are found everywhere except Australia and Africa.

Depending on the species, deer live in a variety of habitats. Most deer species prefer areas with thick forest undergrowth.

Deer are herbivores (plant eaters) that eat lichens (fungus found on trees), leaves, twigs, shoots, berries, and grasses. They have four stomach chambers, which allow them to chew and swallow their food and then regurgitate (vomit) it later for further chewing. This makes digestion more efficient.

A number of species are important game animals throughout the world. They are hunted for meat and sport, and the larger species are often a source of subsistence for native cultures that herd them.