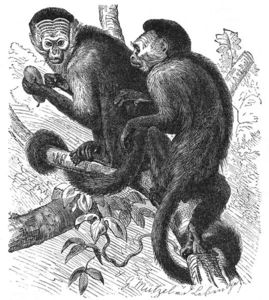 Primates are found in Africa, Asia, and South and Central America. The largest number of primates live in Africa, including the pottos, bushbabies, guenons, mangabeys, colobus monkeys, chimpanzees, gorillas, and baboons. Tarsiers, macaques, lorises, and most of the leaf monkeys live in Asia. Lemurs and aye-ayes are found only on the island of Madagascar. The New World monkeys, such as the marmosets, tamarins, and squirrel monkeys, live in South and Central America.

Primates eat a wide variety of foods. All primates may eat insects, leaves, nuts, seeds, plant gums or fluids, and fruits. But each primate may have a food preference. The indri prefers young plants and leaves, fruit, and seeds. The aye-aye eats fruit and insect larvae (LAR-vee), or young. The blue monkey eats fruits, leaves, and slow-moving insects, as well as occasional birds and small animals.