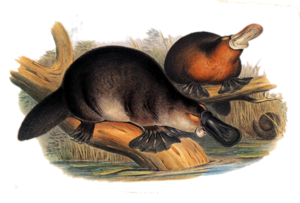 Platypus are either solitary, or a male and female may live together, sharing a burrow. Platypus build two types of burrows along the banks of creeks and ponds. One is a "camping burrows," an all-purpose shelter for male and female; the other is the "nesting burrow," built only by the female, and containing a breeding chamber, or room, for birthing and raising the young. Both sorts of burrows keep their entrances at, slightly above, or below water level, the entrance tunnel climbing at an angle a few feet above water level to prevent flooding of the burrow. The openings can be difficult to spot, since platypus prefer to build them as hidden as possible in sturdy, concave banks with reeds and other aquatic plants at the water's edge, and overhanging sod and tree roots.

A burrow's entrance tunnel is barely wide enough to allow the platypus to pass, so that when the animal emerges from water and forces itself through the entrance tunnel, water on the pelt is squeezed and sponged off, and the platypus's fur is dry when it enters the main tunnel. A platypus may have up to a dozen camping burrows strung along the banks of its territory, providing numerous nearby, safe havens. The animal rotates the burrows for shelter, staying at each a few days, probably to keep down its population of parasites.

A nesting burrow can be as long as 90 feet (30 meters), with two or more branching tunnels that circle about and eventually lead to the central nesting chamber.

Platypus normally hunt and feed at night, but have been seen doing so in the daytime. In the water, a platypus propels itself with powerful strokes of its forelimbs, the extended webbing adding extra push to the motions. It uses the hindlimbs and tail only for steering. As it swims, the platypus swings its head from side to side, allowing a full scan of its surroundings with its sensitive bill. The platypus feeds by snagging swimming creatures with its bill and by rousting them out of stream bottom mud and gravel, shoveling it up with its bill to put buried creatures to flight, then catching them as they try to escape.

Since the platypus must breathe air, it combines underwater hunting with trips to the surface to exhale and inhale. It will usually stay submerged for about a minute at a time, although it can stay submerged for up to five minutes. Platypus blood is especially rich in red cells and hemoglobin, the substance in blood that carries oxygen. The platypus can also ration its blood oxygen supply by reducing its heartbeat from two hundred beats per minute to ten beats per minute.

When not out hunting, a platypus rests in its burrow for up to seventeen hours a day. Platypus are active throughout the year, even in cooler southern Australia and Tasmania, where water temperature drops nearly to the freezing point. Individuals have been known to go into periods of torpor, or sluggishness and reduced activity with a lowering of body temperature, during the coldest months. Such a period, which can last up to six days, is not true hibernation but allows the animal to conserve energy in cold times.

Platypus are for the most part silent. Some naturalists have heard threatened platypus make soft, growling sounds that are only audible at close range. Lifespans for platypus in captivity and in the wild can reach sixteen years.

Platypus mate from August to October. Following an elaborate courtship ritual that includes the male holding on to the female's tail, and the pair swimming in slow circles, the two copulate in the water. Then the female tends to the nesting burrow and chamber, carrying wet leaves and moss with her folded tail for lining the chamber, to prevent the eggs from drying out. The female lays one to three eggs in the chamber two to four weeks after mating. A typical egg is slightly oval, about half an inch in diameter (13 millimeters), with a soft, leathery shell like a reptile's.

The mother incubates the eggs by holding them against her belly fur with her tail, maintaining a constant temperature of 90°F (31.5°C). The young hatch in about ten days, each tearing through the eggshell with a temporary egg tooth. The newly hatched, inch-long young are fragile and translucent, blind and furless, and at about the same stage of development as a newly born marsupial young.

The monotremes, the echidnas and platypus, are the only living mammals that are known to have an ability to sense electricity. The platypus bill is something unique in nature, so sophisticated and advanced that no one can call the platypus "primitive." The skin surface of the bill contains 40,000 tiny electroreceptors, or specialized sensory nerve endings, arranged in rows along the length of the bill. These detect tiny, underwater bursts of electricity from the muscles of swimming creatures that the platypus hunts. The electroreceptors are intermingled with 60,000 mechanoreceptors, nerves ending at the skin in tiny "push rods" that respond to small pressure changes and detect the movements of prey animals underwater and on the bottoms of streams and ponds. Together, the two senses allow the platypus to home in on prey.

In addition to detecting bursts of electricity from prey animals, the electroreceptors in a platypus's bill can probably detect the tiny electric currents made by water flowing over and around rocks and sunken logs, thus producing a three-dimensional map of a river or lake bottom within the platypus brain. In the platypus, the combined abilities of electroreception and mechanoreception are so sensitive and detailed that they have become something like vision, providing a three-dimensional "view" of the platypus's underwater world, and enabling the platypus to pinpoint, in all three dimensions, the exact locations of its prey.

The mother, having no nipples, nurses the young with milk that comes directly from her belly skin. In about four months, the young emerge for the first time from the burrow, each about a foot long and with a full coat of fur.

Predators of platypus, other than humans, include birds of prey such as hawks, eagles, and owls; Murray cod, a freshwater fish; and crocodiles. Carpet pythons, goanna lizards and rakali, or Australian water-rats, prey on young platypus in burrows. Carnivorous mammal species introduced by European settlers, including foxes, dogs, and cats, prey on platypus, although some of these predators are dealt painful ends by the poison spurs of male platypus.