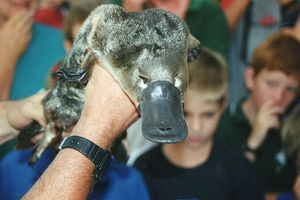 The platypus eats small freshwater animals, which it hunts at night, underwater, with its eyes and ears closed. It finds and catches underwater creatures that are swimming or sunken in the bottom mud by tracking them down with its sensitive bill, which can detect electricity and motion.

Diet is varied, including adult and larval water insects, crayfish (called "yabbies" in Australia), fish, frogs, tadpoles, snails, spiders, freshwater mussels, worms, fish eggs, and unlucky insects that fall into the water from overhanging trees. Occasionally, platypus probe for food at the edge of the water, grubbing under rocks or among roots of plants. A platypus must eat one third to one half of its body weight in food every day.