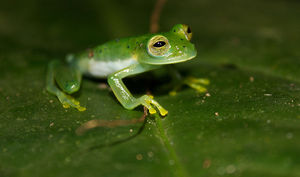 Glass frogs can be found in North, Central, and South America. In North America, they only live in southern Mexico. Many species are found throughout Central America and in many parts of South America as far south as southern Brazil and northern Argentina.

Although little research has been done on their food habits, scientists think these small frogs probably mainly eat tiny insects. The large Pacific giant glass frog, however, can and does consume larger prey, including fishes and other frogs.