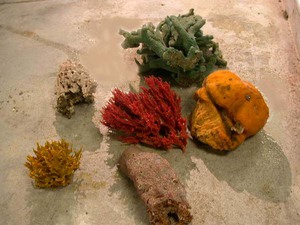 Sponges live all over the world.

Sponges eat tiny particles such as bacterial plankton that they filter from the water that flows through them. A few sponges, however, are carnivorous (kar-NIH-vuh-rus), or meat eating. They engulf and digest small crustaceans (krus-TAY-shuns), or water-dwelling animals that have jointed legs and a hard shell but no backbone.

Some sponges produce compounds that can be used to make drugs for fighting diseases caused by viruses and bacteria. Other sponges are harvested and sold as bath sponges.

The volume of water passing through a sponge in one day can be as much as twenty thousand times the volume of the sponge.

Sponges are not threatened or endangered.